A “Gift” from the Media to Women: Insecurities and the Makeover Paradigm in the Postfeminist Media

In today’s culture, insecurities run rampant. We live in a consumer culture with all kinds of media telling us how to live our lives. These messages are mostly aimed at women, and when women don’t fit these standards (most of which are virtually unachievable), they grow insecure. Feminism attempts to combat this, trying to convince women that they’re as important and valuable as men even if they aren’t the young, white, thin “beauty ideal” they constantly see in the media; yet, all sorts of women still have their insecurities. These insecurities come from a place of self-criticism, an important aspect of postfeminism, a movement that is in full swing in this day and age. Rosalind Gill maintains postfeminism is a “sensibility… [that]… seeks to examine what is distinctive about contemporary articulations of gender in the media” and “emphasizes the contradictory nature of [these] discourses and the entanglement of both feminist and anti-feminist themes within them” (148-9). Postfeminism is like an anti-feminist gift wrapped in feminist wrapping paper; it looks a feminist idea, but a deeper reading presents the anti-feminist meanings behind it. So how do insecurities and self-criticism play into this twisted, complicated sensibility?

Gill claims feminism has empowered women to make choices for themselves, instead doing whatever men desire (153). Therefore, whenever a woman wants to wear make-up or a short skirt, it is because she wants to wear it, not because a man wants it. This problem is one of many postfeminist “gifts”; the woman might say that it’s her choice, but she’s still doing what the men want, even if this isn’t her reasoning for her decision. Susan J. Douglas nails it when she states postfeminism “suggests somehow that feminism is at the root of this when it isn’t – it’s good, old-fashioned, grade-A sexism that reinforces good, old-fashioned, grade-A patriarchy. It’s just much better disguised, in seductive Manolo Blahniks and an Ipex bra” (10).

Now, instead of not being good enough for men, women are not good enough for themselves.  This article discusses the recent trend of “Am I Ugly?” vlogs that are cropping up on YouTube. The idea of these videos is absolutely crazy, partially because I know most of the people who comment on YouTube are jerks, but mostly because it shows how much the media has become an integral and completely demoralizing part of women’s lives. These girls probably think “Oh, I don’t look like Scarlett Johannsen or Emma Stone, so does that make me ugly?” These videos aren’t limited to young white girls; there are plenty of minority teens asking they are ugly. They’re asking to be called ugly, though they desire for the opposite result. When they’re inevitably called ugly, their self-esteem falls, and it’s all because of our consumer culture. Sut Jhally suggests, “…we do not see representations of ‘real’ people in advertisements, but rather we see representations of people who ‘stand for’ reigning social values…” (200). Because these young girls are different the typical beauty ideal, they grow insecure because in the mind of these girls and the rest of the world, these differences make them ugly.

So what can we do about these insecurities? Oh, we’re empowered women, so we can fix anything we don’t like about our bodies because we can! This idea is another big component in postfeminism: the makeover culture. For this makeover culture to exist, “people (predominantly women) [must] believe, first, that they or their life is lacking or flawed in some way; second, that it is amenable to reinvention or transformation by following the advice of relationship, design, or lifestyle experts and practising appropriated modified consumption habits” (Gill 156). The media encourages this makeover practice; the amount of makeover shows on television today, like What Not to Wear, is ridiculous and completely demeaning to women. It’s fine that women want to solve problems they have with their own lifestyles, but when other people (some of whom are men) want to change women’s lifestyles, this causes problems. When women of all ages and races find someone with whom they can identify in the “before” section of these programs, it helps foster these pervasive insecurities. Some insecurities might only be solvable through expensive purchases, which isn’t possible in some households, so many women are forced to watch others cure themselves of insecurity while they wallow in self-doubt. 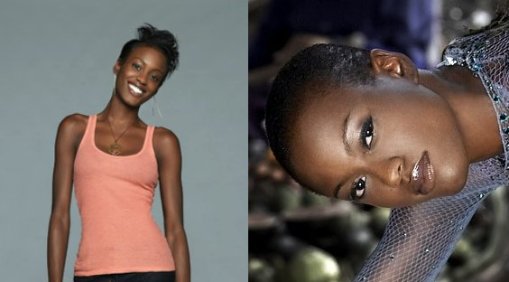 These shows often advocate women to look hyperfeminine. “Strong” and “sexy” are two adjectives that are often paired up when describing women. This is because “women no longer have to exhibit traditionally ‘feminine’ personality traits… [so] they must exhibit hyperfeminine physical traits” (Douglas 17). If a woman wants to be respected in the work place, she must show off a little cleavage (not too much), a little leg (not too much), and a little sexiness (not too much). At least that’s what What Not to Wear has been drilling into women’s brains for ten seasons. Surprisingly, America’s Next Top Model, a usually anti-feminist show, often tries to change something up in the makeover department… at least for one girl a cycle. Above we see Nnenna, a contestant from cycle six. Most models have long, luscious locks, but Tyra Banks shaved Nnenna’s head for her makeover. This challenges the traditional idea that beautiful girls have long hair, because Nnenna took as many beautiful pictures as the other contestants who had long hair. Banks didn’t just chop of the hair of this one beautiful black girl; she often cut of the hair of any contestant she believed could pull off short hair, despite the girl’s race, age, or sexuality. While black role models are still a bit of an absent presence, Nnenna not only showed she could be just as beautiful as the white girls on the show, but she became a role model for many young black girls and girls with short hair.

Unfortunately, Nnenna is still a model who looks beautiful despite whatever makeover she was given on ANTM. What about those who do not believe their bodies are beautiful? The media has a solution for them: plastic surgery! Reality television took self-criticism new a whole new level with the invention of plastic surgery shows, like Extreme Makeover. Don’t like your boobs, butt, nose, arm fat, wrinkles? Get surgery and change it, says the media. Women of all ages fall victim to insecurities that can be solved by plastic surgery. Below is a clip from EM where a woman gets a face lift for her twentieth wedding anniversary. She is forty-eight, which is old by media standards. Shows like EM tell women of all ages they should get cosmetic surgery to fix all those little issues that make them feel ugly. The media implies strong, happy women deserve to be beautiful, no matter how she achieves that beauty. So pain is endured and loads of money is spent for women to get cosmetic surgery and achieve the look of their dreams… which happens to be the same look men desire. Oh, look, another postfeminist “gift”.

Okay, but there have to be men all over these reality makeover shows, right? Um, no. The Biggest Loser and Queer Eye for the Straight Guy featured men, but those were two of the few showed that featured men’s makeovers. Douglas notes these shows were “marked is subtle ways as ‘less serious’” than women’s makeover shows (157). This goes back to how the patriarchy doesn’t need to be changed. It doesn’t matter if men are old, fat, or wrinkly; they’re going to look how they’re going to look, and women are going to like it. Yet, women still need to be changed, whether it’s because they want to or because men want them to. Women can say they’re making the change for themselves, but making this change plays into the media’s anti-feminist ideals of beauty.

Jhally states “the marketplace (and its major ideological tool, advertising) is the major structuring institution of contemporary consumer society” (199). The marketplace uses the media to tell women how to live their lives and how to look, which sends messages of insecurity to all kinds of women, whether they be white, black, another race, young, old, rich or poor. The media reinforces women’s thoughts that there’s only one way to be beautiful. Postfeminists can say “I want to change my looks because I want to”, but they’re still playing into the patriarchy’s desires. Every day, we get a new postfeminist “gift” from the media: they’ll let you think you’re a strong, sexy woman, but you’re going to do it their way and look their way.

Leave a Reply to Don’t Make Me Over: The Truth About TV Makeovers Cancel reply

← Portrayal of Female “Vulnerability” in Music Videos by Jess Cosentino
Postfeminism: A battle between feminism and sexism →