I decided to watch and follow the tweets of Sunday Night Football that aired this week, with the New Orleans Saints playing the Dallas Cowboys. For the most part, I did not see anything too much out of the ordinary. I did find a couple tweets that depict how many different people watch football in America and how diverse their ways of viewing and “celebrating” are. When most people think of football they think of a typical American eating wings and drinking beer. These tweets show that in reality, a variety of people watch the game and have different traditions for how they do so. Not only do we have pizza and wings, but we also have hispanic culture and food to celebrate the game.

Also, when we think of the people who watch Sunday night football we often picture “masculinity”. We most often think about men, hanging out in their man caves on Sunday night watching the game as if they were living it. Here are a few tweets that both agree with that stereotype and even take it a step further with discriminatory and hurtful things said about the people who don’t watch the games.

In these tweets, we definitely see the stereotypical hyper-masculinity that most people often correlate with football. Words like “P***y” and “Fag” are used to describe people who don’t watch the game and even the ref who is calling the game. However, we also see tweets like the ones below, in which people focus more on Carrie Underwood and her singing than the game. This goes against all the normative, hyper-masculine stereotypes we see in the above tweets. 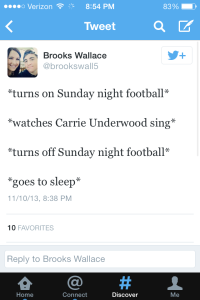 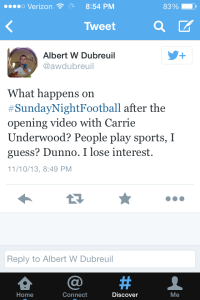 Not only were both of those tweets from men, but we also see girls and women who take part in the live tweets about the football game. Here we see two different female spectators commenting/tweeting about the game: 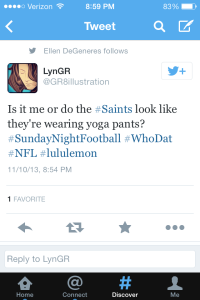 In conclusion, as I followed the Sunday Night Football tweets, I definitely found some things that most Americans would coin as “normal” and stereotypical. However, I also found things that we would not normally consider to be a part of the football culture here in America. Such as the hispanic representation, the female representation, or the males commenting solely on Carrie Underwood’s performance. All in all, the football fanbase is diverse and wide. After all, the game was Sunday night’s biggest ratings:

← Scrubbing In, MTV Show. By: Kelsey Wathen
The Hunger Games Taking Over? By Candace McCullough →