The Hunger Games Taking Over? By Candace McCullough

Year after year movie sequels are produced from #1 seller books and culminate numerous fans within popular culture.  One of the more recent transformations from book to film is The Hunger Games trilogy by Susanne Collins.  Unlike the book trilogy, the movie producers are expanding the final book into two separate movies, making a film quadrilogy.  The book series had a large fan base before there was talk about making them into movies (mostly female), but now that the second movie is about to be released in theaters, the fan base has grown even more.  This “’fandom’ is a vehicle for marginalized subterranean groups (women, the young, gays, etc.) to pry open space for their cultural concerns within dominant representations” through the work of fan fiction (Jenkins III 58).  While I appreciate that this video is not the most eventful or exciting, it is truly inspiring to see that a fan of The Hunger Games would dedicate hours and hours to replicate the scenery in the form of a video game.  Even without characters in the video, through the use of music and sound the artist conveys feelings of excitement and anxiousness when showing the arrows that would inevitably be used to kill another person.  This fan has changed the movie and book into a different type of media that is more pleasurable for him, known as “poaching”, through video games (Jenkins III 57).  This active form of reading can sometimes be used to express deeper meanings within a text through writing fan fiction stories.  The majority of fan fiction authors are female, but the majority of video game players are male.  Within this assumption, it is easy to realize that this fan who made the video game replica is trying to appeal to the male audience rather than the already established female presence in fan fiction.  It may also be noted that through “slash fiction”, gays and lesbians create relationships between characters that would not actually happen in the text (Jenkins 63).  For example, there are a few “slash fictions” that incorporate a romantic relationship between Peeta/Gale rather than either of the men having a relationship with Katniss.  “Slash fiction” helps the LGTB community relate to the otherwise heteronormative storyline.  The video game resembles the scenery depicted in The Hunger Games film and is not an original representation of the books.  It seems that this fan may have only watched the movie and skipped out of reading the books because there is not much fluctuation between his video game and the movie.

It is not much of a surprise that The Hunger Games is appealing to both sexes because it incorporates a love triangle for the women and includes extreme action and killing other people for the male audience.  This mainstream view of the movie misses the entire point of the book and causes the audience to breeze past the problem in their own world called Panem: a government controlling their people by having children from each district compete and kill one another for entertainment of the richer people in the Capitol. 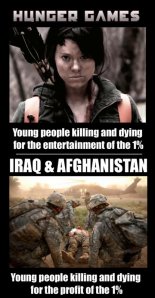 This meme reminds the audience that although The Hunger Games is only from Collin’s imagination, it also parallels to war.  It forces the fans and producers to look at how patriotism towards either a district or country reinforces oppression onto the poor people in each society.  Lois Tyson expressed that “because patriotism leads the poor to see themselves as members of a nation, separate from other nations, rather than as members of a worldwide oppressed class opposed to all privileged classes,” they cannot see themselves as an entire poor class, from both or all nations, to come together and revolt against capitalism where the rich are getting richer and the poor are becoming poorer (59).  Both in Panem and the war in Iraq only a small percentage of each society (the rich) gains something (entertainment or money) from the killings.  In a Jezebel article, consumption is frowned upon at the point of replicating an amusement park after The Hunger Games.  After reading the book trilogy, the connection of The Hunger Games to the war is not spontaneous, especially after watching the movie where the love triangle was emphasized.  This oppositional reading of the movie and books forces the public to question the real reason why the war in Iraq began and why it has not ended.  While some Hunger Games fans are upset by the parallel to the war in Iraq, this attention to the movie could perhaps enhance the production of the movies.  “Haters’ assumption of identity that they affiliate with their actions as anti-fans mirrors the activities that regular fans assume in their remixing, reformulating, love, and acceptance of popular culture texts and figures” (Springer 64).  The anti-fan that made the meme has a valid argument.  The amount of attention the books and movies are receiving should inspire the youth who read and/or watch this storyline to critically think about how it applies to the world we live in.