Sexualization of Women in the Media by Erin Ramirez

In the media today there is not very many places you can look that there won’t be women being sexualized.  I used to notice this sexualization before every now and then, but after taking this class I have noticed it much more.  I have been thinking a lot more intersectionally.  There are some times where the media sexualizes women and I have no idea why.  Women are sexualized even if the ad, product, movie, show or whatever it may be is directed towards an audience of mainly women.  That makes no sense to me.

Cosmopolitan is a magazine that is marketed towards and meant for mainly female audiences.  It is also a magazine that is meant for mainly straight women considering most of the articles about sex talk about having sex with a male.  I noticed that most of the Cosmo have a famous women posing in some sexual way.  I also noticed that the word “sex” is always placed right next to or somewhere near the woman on the cover’s breasts.  This is obviously done to draw attention to her breasts.  If Cosmo is a magazine made mainly for women, and straight women at that, why would they want to draw attention to a woman’s breasts?  That is one of the times I have thought the sexualization of women in media is pointless.  In Dreamworlds 3, they talk about women only being defined by their sexuality.  Cosmo is a perfect example of that since they sexualize women even when it is directed towards straight women.

In Miley Cyrus’ music video for her very popular song, Wrecking Ball, she is seen multiple times swinging on a wrecking ball naked.  Even when she is not naked, the clothes she is wearing barely cover anything up.  Miley is also licking a sledge hammer at one point.  This is an example of the media sexualizing women by saying that even though a man is around she still needs sex and an object that could be considered “penis shaped” because she needs a man in her life.  The song is about a heartbreak she went through or is currently going through, and there is nothing in the song that talks about sex.  The media still needed to direct this video towards male audiences though and sexualize her.

Luke Bryan- Country Girl (Shake it for Me)

In this music video there are women that are learning a dance routine because they want to be in Luke Bryan’s music video.  They are shown doing suggestive dance moves and clearly being sexualized.  This is a male artist’s music video, so of course the media has to sexualize women.  The women are all only attractive and skinny.  The camera zooms in on the women’s butts and other areas that are easily sexualized.  There are a lot of moments when the women are looking into the camera or over their shoulders.  According to John Berger, this has to do with the gaze.  The gaze is about how “men act and women appear” (Berger). 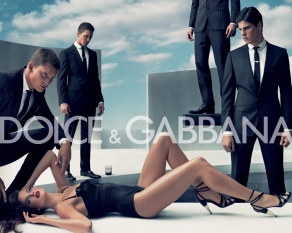 Dolce and Gabbana is a high fashion clothing line that has been known for their edgy and out there advertising.  Their advertising is mainly revolved around the sexualization of women like everything else in the media.  These images shown women in sugesttive positions or in positions where the man clearly has power over her.  The women are even sexualized in the ads where they are trying to sell women’s clothing.  There are also no women of color in any of these ads.  This is related to Peggy Mcintosh’s article saying that you can turn on the TV or look at an ad and there are mainly white people (McIntosh 71).

Even bands like One Direction that have a young fan base have been sexualizing women.  In One Direction’s music video for “Best Song Ever” there is a women assistant.  Even though a male is dressed up like a man, they still treat her and make her look sexualized.  This reminded me of when we watched Rupaul’s Drag Race and how people can act like the stereotypical type of a women.  “Realness” is not exactly a category in which one competes, it is a standard that is used to judge any given performance within established categories. (Butler 129)  This is what some people think is real for women because of how the media portrays and sexualizes women.

All five of these artifacts show how women are sexualized in the media.  The women are always shown either in something sexual, acting sexual, or posing sexually.  This all goes back to Dreamworlds 3 where the women are fufilling the heterosexual male fantasy.  These women are meant to look real and go with the norm, but in reality they aren’t real or normal at all

There is a clear target audience for all of these different artifacts as well.  They are all directed towards men.  Even if the product that the company is trying to sell is meant for women, the ad will be directed towards the typical heterosexual male.  The media makes women look like they are only here to be and act sexual because that’s what the male audience wants.

In my five artifacts that I chose, there was one black women.  She was dancing in Luke Bryan’s “Shake it for Me” music video.  She was not nearly shown as much as the other white women dancing in the video though.  There was no other ethnicities shown other than black or white women as well.  That would go against what is considered normal.  It is already going against what is considered normal by putting a black women in a country music video.  This goes against what the author of “Queering Black heterosexuality” says. She says that “when black women are used in media they can either be extremely hypersexual or asexual there isn’t anything in between”.  This means that if black women are being sexualized, they are being over sexualized.  An example of that would be black women in rap music videos being very dramatic and way too sexual towards the rappers.  The black women in Luke Bryan’s video was sexualized, but not in the way that they usually are according to Kimberly Springer.

I will never understand why women are sexualized in almost every aspect of the media.  The one that confuses me the most is why women are sexualized on covers of magazines meant for heterosexual women.  That doesn’t make any sense.  Most heterosexual women are not going to want to buy a magazine with suggestive words that are placed by a women’s breasts to make them look there anymore than they would have if the words hadn’t been placed there.  This is how Cosmopolitan makes their covers.  There should be more women portrayed as intelligent and successful, not sexy and hot.  Since we are mainly portrayed as sexy and hot, that’s how people think women are.  Going back to Rupaul’s Drag Race, they only see the stereotypical women and just assume that is how they are.  The show is about men that dress up like women, but it is so over dramatized.  Most women do not act or dress the way that they do.  They don’t know that very well though because they only see how the media portrays and sexualizes women.  Hopefully the media will one day realize how much the sexualization of women really is.

← Examining Race and Gender in Product Marketing
Vehemence Against Females →